Skip to content
This article would not have been possible without assistance from TPUSA members and other sources.
Nicholas J Fuentes is one of the last few remaining alt-right grifters who hasn’t been cannibalized by their own fanbase, but he’s getting there. Fuentes is the founder and host of the America First show, where he rails against feminism, immigration, Israel, and whichever right-wing shithead he’s feuding with this week; including Richard Spencer, Sebastian Gorka, literally every woman who ever got involved in alt-right politics, and most recently, TPUSA founder Charlie Kirk. 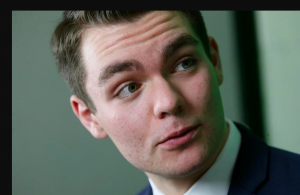 Our buddy Nick Fuentes had a humble start as a student of Lyons Township High School. When he wasn’t busy picking on his queer and Jewish classmates (alongside previously identified fellow asshole and later member of Patriot Front and the Chicago Proud Boys, Nick John Stiso, now a Westchester Taco Bell employee) he was an active member of Model UN and Speech Club. As a senior, he was elected class president. He was even given some airtime on LTTV, the high school TV station. The Nicholas J Fuentes Show, as it was called, allowed him to spout milquetoast neoconservative talking points from a teenager who seemed determined to act as much like a boomer as he physically could. (Also, we heard that he supported Ted Cruz back then, and that’s pretty funny, too.)

After completing Lyons Township High School, his views became more and more extreme. Through dedicated anti-fascist research, Nick Fuentes was outed as an attendee of Unite The Right, the deadly white supremacist rally that took place in Charlottesville, Virginia, at which point he was promptly run out of Boston University. The Chicago-Tribune covered the situation, where Nick Fuentes espoused anti-Muslim and anti-immigrant views, along with defending white pride and the Boston situation: 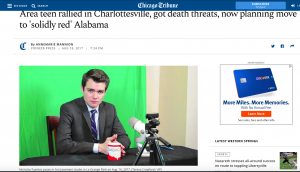 He received his first splash of internet fame after he went on an antisemitic rant on his show, which concluded with

For those who don’t know the ugly history of the word “Globalist” The Atlantic took a dive into its background:

“Despite the seemingly joking use of the term “globalist” by Trump and Mulvaney, many were quick to point to the word’s unseemly past as an antisemitic slur, embraced in alt-right circles before spreading into broader political discourse”

As the Anti-Defamation League’s Jonathan Greenblatt puts it:

“Where the term originates from is a reference to Jewish people who are seen as having allegiances not to their countries of origin like the United States, but to some global conspiracy”

In short, “globalist” is an antisemitic dog whistle for Jewish people. 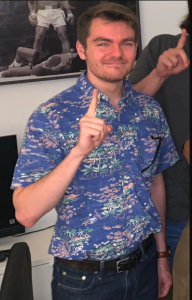 Since that outburst, Nick has taken great pains to hide his propensity towards violence in the public eye. He recently pushed back on a Spectator article claiming he is an “ethno-nationalist,” which he denies despite the fact that he spends all his airtime spouting white nationalist talking points to his fanbase of groypers and blatant Neo-Nazis. What’s a groyper? Basically, the new Alt-Right/White Supremacist mascot, replacing Pepe the racist frog, per Confessions of a Groyper, a data collection project: 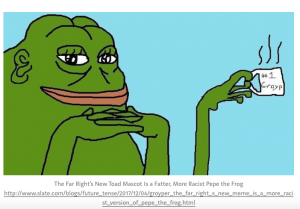 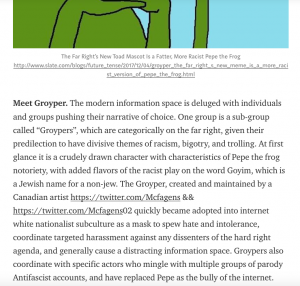 “The reason I wouldn’t call myself a white nationalist—it’s not because I don’t see the necessity for white people to have a homeland and for white people to have a country,” Fuentes said. “It’s because I think that kind of terminology is used almost exclusively by the left to defame and I think the terminology and the labels that we use—I don’t think that we can look at them outside of the context of their connotations in America.”

Essentially, Nick Fuentes acknowledges that he believes in white nationalism, he just doesn’t like being called by that term because it makes him look bad. It’s not often that a Nazi will explain to your face the concept of a dog whistle. Nick isn’t a smart person. 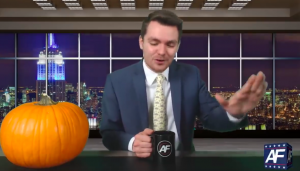 “America First” was more than a dog whistle, though. Nick was one of the last alt-right personalities to hop off the Trump train, which earned him a fair bit of criticism from the more extremist parts of Nazi twitter.

He rejects all claims of being a white nationalist, but anyone paying any attention sees this blatant facade for what it is. He leans hard into all the hateful rhetoric that is socially acceptable in conservative circles: hatred of Muslims, of immigrants, of trans people, and of anyone else he can denigrate without anybody noticing his red armband. And all the usual hatred of minorities is also there, just under the surface. He hates miscegenation, is obsessed with race demographics, and believes wholeheartedly in the antisemetic conspiracy theories that Neo-Nazis peddle. Calling him anything but a Nazi is simply misleading. 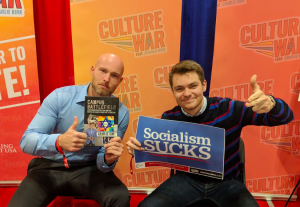 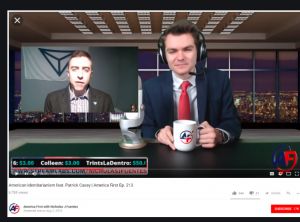 Earlier this year, the media collective Unicorn Riot released thousands of messages that members of the Neo-Nazi organization the American Identity Movement (AmIM) posted on the platform Discord, and they featured antisemitism, Holocaust denial, racism, and homophobia, along with praise for the convicted murderer of Heather Heyer at the 2017 white supremacist rally in Charlottesville, Virginia. AmIM also helped organize the Charlottesville rally, and Patrick Casey was in attendance.

Nick Fuentes and Patrick Casey team up to punch Charlie Kirk and TPUSA while they’re on tour, resulting in some cringe headlines like this one: 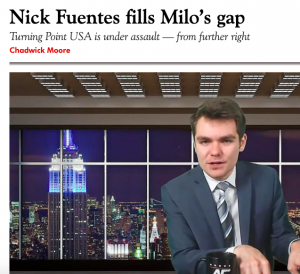 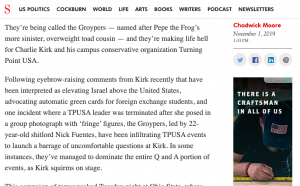 And then even worse articles describing the situation like this. Nick Fuentes and Patrick Casey are further splintering their own movement which is like popcorn to us, even if TPUSA membership is distressed:

On Patrick Casey’s side, he is reveling in some attention, as his hate group membership has plummeted following their communication channel leaks and subsequent doxxes. As he struggles for relevancy, he seeks to hitch his wagon to Nick Fuentes’ star,  “On November 1, Casey posted a link on his Telegram account to a SoundCloud-based podcast called Restoring Order, writing that for the “first episode” of the podcast, “I’m joined by Nick Fuentes and Jake Lloyd to discuss recent events: TPUSA’s recent Q&A sessions, Conservatism Inc.’s response, the purpose of the Dissident Right & more!” The SoundCloud page for Restoring Order features a link to AmIM’s donation page,” from Media Matters article “A white nationalist launched a SoundCloud podcast and plugged his secret Twitter account.” 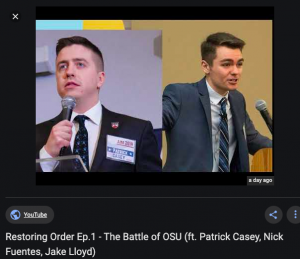 Not to be outdone, another irrelevant white supremacist has jumped into the middle of the TPUSA controversy and attempted to court Nick: 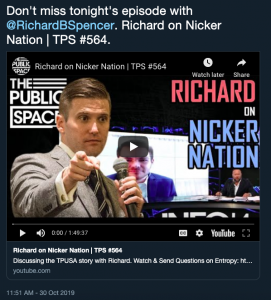 Remember Richard Spencer? That basic white guy appearance hides a radical white separatist whose goal is the establishment of a white ethnostate in North America. Since he’s been kicking around the fringes of importance, here’s the SPLC’s primer on him and views.

Richard Spencer is in Chicago nowadays, squatting in his girlfriend Megan Bobonick’s apartment in the South Loop, right by Cermak and Michigan. She’s a noisy faux-liberal wannabe Satanist seeking her doctoral degree at Lewis University.

For more information on both of them, including how their relationship began and how it was determined that Megan’s liberalism is an act, read this comrade’s article:

And then a deeper dive: From the Underneath the Academic Veneer, Meet the Real Megan Bobonick article:

Richard Spencer and Patrick Casey are the company Nick Fuentes courts and seeks to showcase to his audience as a means to support them in their weird crusades against other organizations.

Nick J Fuentes, the Zoomer Nazi, has said in the past that he hopes to attend university in Alabama. Until then, he seems perfectly willing to continue living off sales of the shitty T-shirts he shills on his website. His “studio” with his desk and shitty green screen, can presumably be found in his bedroom at his parents’ house where he currently lives.

Due to the publishing requirements of this platform, we cannot disseminate particularly sensitive information about Nick Fuentes, Patrick Casey and Richard Spencer, but you can click here for redacted information.
As always, if you have any tips about any fascists in Chicago or elsewhere, please reach out to antifascistchicago@riseup.net