Skip to content
Thomas Fredrick Christensen aka “Trigger Tom” is the president of the Chicago Proud Boys, per a recent MAGA meetup infiltration. Nationally, the Proud Boys have a long and storied history as a violent right-wing extremist group targeting leftists, progressives, or anyone they deem as “SJWs”
With Trigger Tom Frederick Christensen’s help, the Chicago Proud Boys are working with other white supremacists. From the Chicago Sun-Times article:
We see Tom here alongside the leader of another ADL-designated hate group, Brien James of American Guard, Trigger Tom Christensen is well-known to the Chicago scene. Pulled from the same story: 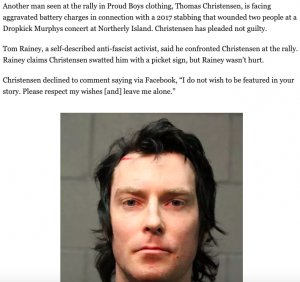 Update, Tom has been convicted of two felonies stemming from his knife attack against a concertgoer in 2017. His sentencing is September 30.  Read our full update
ChicagoAF note: we have removed any addresses linked to him as his current address is Cook County Jail until his transfer to an IL DOC prison.
Wait, who are these Proud Boys anyways?
From Wikipedia: “The [Proud Boys] organization glorifies political violence against leftists, re-enacting political assassinations, wearing shirts that praise Augusto Pinochet‘s murders of leftists, and participating directly in political violence.[23][24] [Founder Gavin] McInnes has said “I want violence, I want punching in the face. I’m disappointed in Trump supporters for not punching enough.”[23][36] He stated, “We don’t start fights […] but we will finish them.”[42] Heidi Beirich, the Intelligence Project director for the Southern Poverty Law Center, said that this form of intentional aggression was not common among far-right groups in the past; she said: “‘We’re going to show up and we’re intending to get in fights,’ that’s a new thing.”[43] In August 2018, Twitter shut down the official account for the group, as well as McInnes’ account, under its policy prohibiting violent extremist groups; at the time, the group’s profile photo was a member punching a counter-protester.[44] In late November 2018, it was reported, based on an internal memo of the Clark County, Washington Sheriff’s Office, that the FBI had classified the Proud Boys as an extremist group with ties to white nationalism.[12] Two weeks later, however, the Special Agent in Charge of the FBI’s Oregon office denied that the FBI made such designations, ascribing the error by the Sheriff’s Office to a confusion over the FBI designating the group as such, as a designation made by the Southern Poverty Law Center (SPLC) and other outside agencies.[26]”
Proud Boys, like Tom and his crew, like to hide and say they’re not a hate group. Proud Boys, around Chicago and elsewhere, consistently threaten violence toward people of color, women and LQBTQ+ folks, so much so that they’ve been banned from several social media platforms, including Twitter.  Don’t believe us? Check out what the Anti-Defamation League and Southern Poverty Law Center have to say about them.
Anyways, back to Trigger Tom. How did he get that nickname, anyways? Oh it’s from him claiming credit for shooting an unarmed Portland antifascist in the stomach as he left a concert in 2010. It hasn’t been proven but his recent history has shown him to be violent as he’s still facing charges from stabbing two random people at a Dropkick Murphys show at Northerly Island with a pocket knife he smuggled in, tucked in his shoe. While the stabbing is indeed tragic, the people are okay, and the remaining tragedy here is that 2017 Dropkicks is still being referred to as ‘punk’. Kidding, of course.
Afterwards, as in Portland, the community responded and, with support from accomplices like Midwest Unrest, they were able to get the word out about Trigger Tom Frederick Christensen. 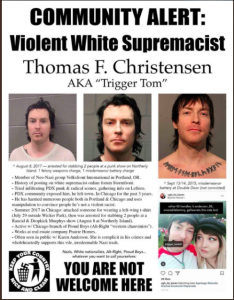 In poking around online for Tom Frederick Christensen, we found his Pinterest page and links to his now-defunct websites on Google+ and Brandyourself. His Pinterest showcased his love of Gorillaz and some dystopia/steampunk imagery:

This makes more sense when we found his cosplay forums in steam punk aesthetic before he started LARPing to imitate the Beastie Boys music video Sabotage. The irony that someone like Tom chose a song written by Jewish dudes does not go unnoticed. 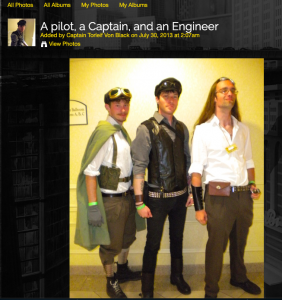 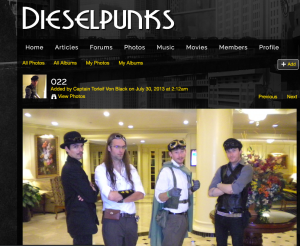 That’s pulled straight from his Diesel Punks profile (archive) For more cringe-worthy pics, see here.
To continue, an easy Google search lead us to some of his family members with the same last name of Tom Christensen and their very public Facebook pages. From there, we were able to spot a certain Tom Dundee who happened to be friends with a lot of them:

Hi Tom Christensen! Remember your Pinterest? A cursory look through it gave us all the clues to identify your profile photo on Facebook is Ace from Gorillaz. While his alt FB (archive) is pretty barren to the public eye, it’s easy to find.
Interestingly, he reviews some places on FB. We’re going to go out on a limb here and guess that the places and people he reviewed negatively are actually really cool and maybe told him to fuck off for being a fascist piece of shit? Because it looks like he only reviews Proud Boy related things, like the Tattoo place in Ontario that supported a Proud Boy toy drive.
Digging a little deeper, we were able to identify his girlfriend as Karen Anderson aka Karen Em on Facebook. She looks like this:

Per her LinkedIn page, Karen manages the Floyd’s Barbershop on Clybourne at:

We know from white nationalist Richard Spencer’s girlfriend Megan Bobonick,  that white women provide political cover for fascists and normalize their behavior by maintaining relationships with them. More information on Megan Bobonick, doctoral student of education at Lewis University.

Speaking of normalizing, Tom has been around the Chicago metal-punk-diesel-alternative scene for a long time as he’s so old. Some punk fans may have friended him or been friended by him on Facebook by accident, without knowing he’s the leader of a violent far-right group with ties to white nationalism.

Remember that community defense is everyone’s responsibility and do take a few minutes to see if you can spot yourself or your friends on Tom Dundee’s FB friend list.

Tom trying to befriend leftists on Facebook ties in with how dear Portland comrades warned their community about Tom Christensen keeping tabs on left-leaning folks, perhaps with the intention of leaking info to law enforcement (which we saw from the above Proud Boys/American Guard/CPD rally isn’t that hard to believe). In fact, this isn’t the first time Tom has been called a fed informant. From Grey Coast Anarchist News in 2012:

After we got into his Facebook page, we were able to discern his regular spots, which are used to run Proud Boy meetups.

Trump Tower: once a month only for MAGA Meetup Chicago. This is where Proud Boys recruit potential recruits into their vetting group “Boys of Liberty 312”, which is just a front group for uninitiated Proud Boys.

Additionally, the Proud Boys meet at the following hangout spots:

Club Belmont: 7844 W Belmont Ave
Babe’s bar: 4416 N Milwaukee Ave
Liars Club: 1665 W Fullerton Ave, Chicago, IL 60614
How do these fine establishments feel about a known white supremacist and violent offender frequenting? After we drop all the dossiers, we’ll circle back. Although, we have a feeling Club Belmont is a secret supporter:
Using publicly available databases, we were able to locate his home address and his phone number, which is now irrelevant as he is in custody.
And where does that leave us?  Well, we found his LinkedIn page where he says he had worked for an unknown place, potentially in the nonprofit industrial complex as a Nonprofit Organization Management Professional. Again, this information is irrelevant. 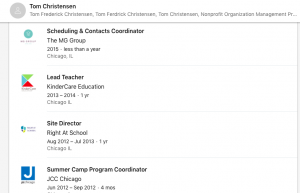 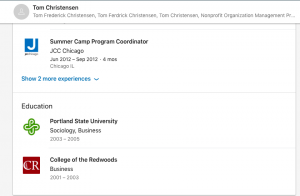 How’d we get tipped off on him and the crew anyway? A correctional officer by the name of Scott Pilz from Cartersville, Illinois whom we will cover in a future article, found Tommy Boy’s private “Sabotage” video where they name each other to the tune of the Beastie Boys hit song and added it to his public YouTube playlist, which we found by googling “Chicago Proud Boys YouTube” 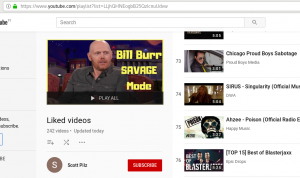 Did you miss it on our twitter? Here’s the bitchute video!

That’s some real sabotage. So proud of your boys!
Also in case you can’t identify Trigger Tom Frederick Christensen, president of the Chicago Proud Boys and known white nationalist by his stupid face: 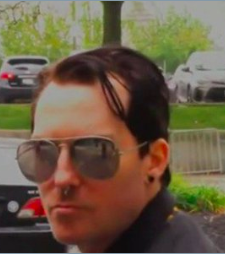 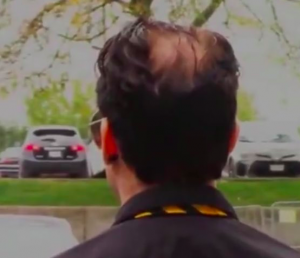 As always, if you have any tips about Trigger Tom Frederick Christensen, his crew, Karen, or any other fascists, reach out to us at antifascistchicago@riseup.net.